It's strange that this blogger site still exists- I moved all the old posts over to the only place I post, parkerspace.com and would have let this one fade away, but these things don't fade away. They get appropriated by skanky link farms with your name and posts still connected, so I have to keep it going until Blogger destroys itself. Anyway, I don't post here but once every six years now, move along.

*I did eventually get theinterman.com back though!

But if you have me linked here, I'm using my main site, PARKERSPACE.com for the blog now. So please update if you have a minute. And while you've got that template cracked open, you might as well change THEINTERMAN.COM to .NET (assuming you linked to my book's site at some point). Because I didn't get the notice that it was expiring and Bam! I lost the dot com. So come on over to the main site and poke around, have some lemonade.

"Please." If you haven't checked in here in a few days, I've moved the blog over to my main website, PARKERSPACE. It's something like 73% more nifty, according to studies. And if you have absolutely nothing else to write about and want to post an entry on your own blog, you could do me a solid and mention the move. We'll all be happier over there.

That Von Trapp Family number is dedicated to the beloved Mystifying Oracle, which we now must leave to drift around at the mercy of the internet tide, until it's buried in the sediment forever. As promised, I'm finally folding the blog into my main website, PARKERSPACE.com so the site will actually be updated frequently again. Though I knew a blog was a keen thing to have three years ago, (just two years behind everyone else!) I didn't realize it would emerge victorious as the web paradigm. But it has, and thanks to Steven Gettis's steely resolve at beating a WordPress theme silly, I now have a hybrid home site and weblog. You'll remember him from his massive collection of literary figures drawn by comics luminaries. Which is the most revealing site online about cartoonists, because you can tell who reads and who doesn't.

I know what a pain it is to make changes to the blogroll, but I hope you'll do it for me- I've had Parkerspace for seven years now, so it's really unlikely the blog will make another rail hop. And those of you who have been nice enough to link both sites can trim it to one. I'm finally actually using the visual metaphor appropriate for the name, with old science book art that portrayed the future as it was supposed to turn out. Soon I'll have the covers column at left clickable for the respective publisher pages, and some of the other categories will be live within a week or so. That's how Mystifying Oracle (named for my lap-drawing Ouija board, see very first post) will live on, as the Newsletter you can join the mailing list for. Maybe I'll get up the gumption to write the "About" section tomorrow, and try to use it to trick people into filling in my Wikipedia entry for me.

Those of you who have switched locations- should I do referrer posts for a while?

Finally, we have official corroboration on a phenomena that has vexed my drawing friends and I for a decade. For me this began at Artamus Studios years ago whenever Chuck Wojtkiewicz would break out his set of ellipses and circle templates (which he kindly lent me all the time!) and the room would fill with a cheese smell. We puzzled over this many a day.

Flash forward to the present and Mercury Studio (with no S!) when Steve Lieber broke out his fairly new set of ALVIN templates. Wham! The smell is back. Much speculation ensues again. Finally Steve decided to write the Alvin company and ask them.

And they answered! Go read the correspondence at the Mercury Blog. "We know this is not a prank." 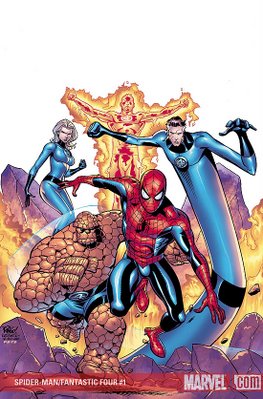 Time to talk Spidey and the Fantastic Four.Yep. And I ain't a-stoppin' there. This one's with Dave Richards who did such a great job on the Agents of Atlas articles at COMIC BOOK RESOURCES. 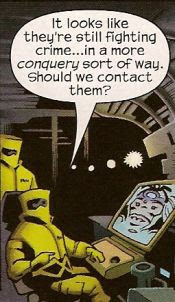 It's official, the comics reading public loves KARL, the chill AIM agent. Unfortunately I also had a cameo by him in the upcoming Sons of the Serpent storyline, but it got cut because the Adventures books are so anti-continuity, even their own. Keeping up the Adventures line focus, the best place to turn to now (for my stories anyway) is Warren Peace Sings The Blues, where blogger Matt Brady (the one that isn't the Newsarama potentate) gives a play by play of some of the Adventures Fantastic Four stories and wraps up with "A Not So Beautiful Mind". Thanks for picking some of the most fun bits, Matt, your check is on the way.

Mental Organism Designed Only to SELL OUT!

I don't know if it will actually make one of those little comics press releases, but I've just heard that Marvel Adventures Avengers #9, known to you as the ALL MODOC issue is completely sold out. Now I usually make fun of those announcements because generally publishers have print runs based on the orders, so they should all sell out. But for the news to come back in so fast I think, means retailers have been trying to lay hands on more. Which for the Marvel Adventures line is big news! While the books do well out in the world of Target and Walmart (and Fred Meyer here in Portland) it's been a gradual acceptance in the Direct Market. It took about a year to convince readers we weren't the Marvel Age line and that we weren't doing simplified retellings of stories in a manga-esque style. Some of you early adopters embraced the books right away and have been a great help in getting the word out on the line. I'm pretty excited about our Avengers book for 2007- thanks to Juan Santacruz I think #12, the Ego The Living Playah (or whatever I called it) story may rival this Modoc story for attention, and after that the four issue arc teams me with the man who made Agents of Atlas work, Leonard Kirk! So let's badger some retailers and go back to press...

Tim O'Shea and I talked about comics for SilverBulletComicBooks, and he gave me the chance to talk about people other than myself! SEE as I blab about creators like:
Steve Lieber
Tomm Coker
Jeff Smith
Leonard Kirk
Mike Wieringo
Gail Simone
Eddie Campbell
Alex Toth
Sandy Jarrell
Carla Speed McNeil
Paul Tobin
Colleen Coover
Leland Purvis
Yep, we talk trash about others all the livelong day!

Go to your store, and get some closure! Report back if you like.

The insidious Mr. Lao has a message and a preview of the final issue of AGENTS OF ATLAS over at NEWSARAMA right now! Get it, get it, and get it.

It comes to an end tomorrow. In the meantime you can preview the first three pages here. I'll be fidgeting...

Marvel Organisms Designed Only for Coolness

The time has come. All will become MODOC. Click the link to read a few pages from the story at NEWSARAMA.

While we're waiting to see what 2007 holds for us all, I guess we could be reading reviews of the first issue of WALK-IN from Virgin Comics.

And this one I appreciate even though they think I drew the book instead of wrote it. IGN.com

If you find any you think I might like (that's code for All Positive!) pass them on, because with the common word "walk" in our title and the touchy word "virgin" in the publisher's name, it's kind of hard for me to find things that are actually relevant.

You know, it was worth participating in the Leave Your Spandex Christmas Roundtable just to have Manolis Vamvounis mock up a Gorilla Man iPod ad.